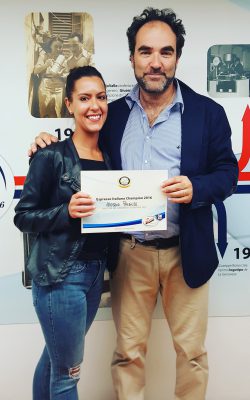 I came here with the desire to participate and give my best, but honestly not with the intention of winning, and I’m even more happy and satisfied both personal and professional – said Alessia Preziuso – An exciting race which  made me a bit ‘nervous ,of course, but that gave me the opportunity to test my professionality.”

Alessia Preziuso, 31, works at the social wine bar “ExATelier” of Albenga (SV). She approached the world of coffee, almost by accident, seven years ago today; today, in addition to a job, coffee has become a real passion. Now she accessed to the semi-finals of the championship to be held in Trieste at the Triestespresso fair on October 20 (October 21 final). After this stage, the schedule of preliminary races foresees other throughout Italy and abroad (China, Taiwan, Korea, Japan and Greece): in 2015 competed more than 200 baristi.

Espresso Italiano Champion is not an easy race: competitors must find the right grind of coffee and prepare four espresso and four cappuccino, all in 11 minutes and under the eyes of the technical judges and the control of a group of tasters of the International Institute Coffee tasters (IIAC) operating blindly.

“La Genovese believes in education and in the organization of such events,that give importance to the barista and they do grow professionally – said Alessandro Borea, owner of roasting company which this year celebrates 80 years – we are very pleased that for the second year won a young bartender, it is a good omen for the future of the bars in Liguria “.