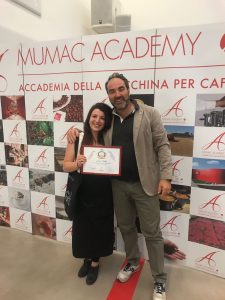 Sara Trotta will be among the seven baristas who will represent Italy at the international final of the Espresso Italiano Champion 2018. Which won by using our Anniversary blend.

We are really happy for our Sara Trotta, which at the Italian finals, which took place at the Mumac Academy in Binasco (MI) on June 7th and 8th, managed to qualify for the international stage of the championship.

During the 20 selection events held throughout Italy, 150 baristas participated this year. To reach the international stage of the Espresso Italiano Champion 2018, the seven winners had to find the perfect grind and serve four espressos and four cappuccinos. All in just 11 minutes. In the semi-finals and finals, the equipment is the same for everyone, while the choice of the blend is left to the competitor. An important element, because part of the score is given by a sensory jury, where the quality of the Anniversary Blend and the knowledge of Sara of the blend combined with her
mastery have contributed to the final result. 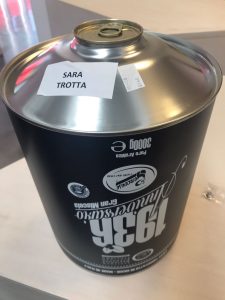 The winners and finalists for Italy with Sara Trotta will be: Lorenzo Minelli from Bologna, Daniela Giordani from Ravenna, Pang Hoi San from Treviso, Chiara Yan Jin from Sondrio, Robin Alam from Bologna, Patrick Sinapi from Rome. From 26 to 28 November 2018 will be engaged in Milan in the final where there will also be the seven winners of the international stages of the race (Germany, Bulgaria, China, Taiwan, Thailand, Korea, Japan).

For Sara we organized a training course by providing a skilled coach, Fabrizio Giorgini, and our tasting room.