Three generations have followed – and still follow – in managing the company while keeping alive the passion for coffee since 1936 has marked the Borea family in everything they did. 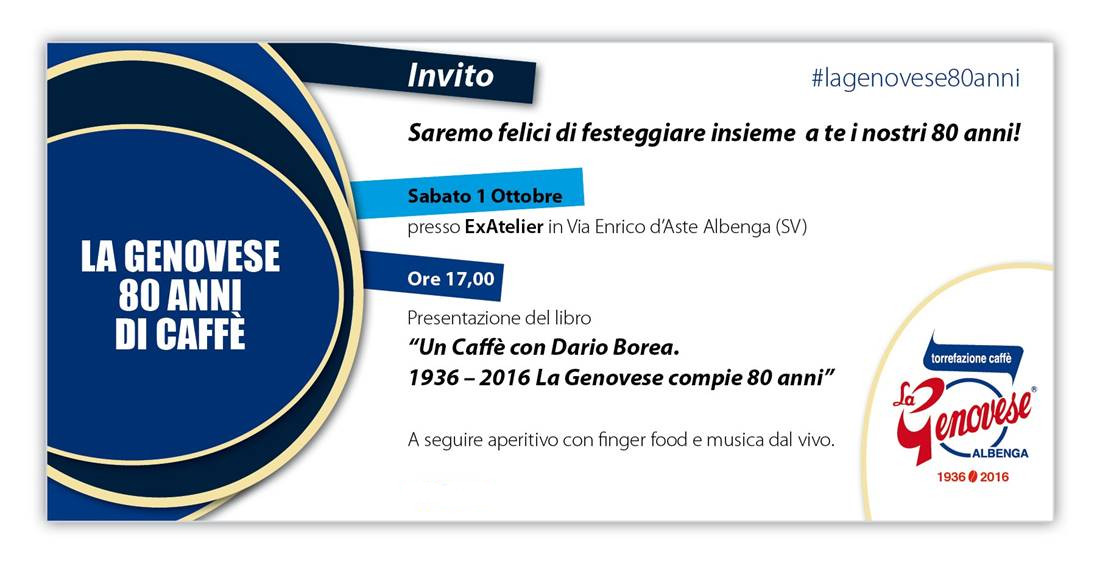 For this great achievement, the company has decided to organize on Saturday, October 1st from 5 PM at the bar “ExAtelier” right in the historic center of his hometown Albenga, an evening where the Borea family, coffee, experience and the love for roasting will intertwine in a story 80 years long.

La Genovese has roots in the city since 1936, it supplied, and keep on doing it, many bars, restaurants and café becoming an integral part of the city itself, it offers not only high quality Espresso coffee blends, but also service and training courses for professional baristas.

To better celebrate this anniversary, La Genovese has created a series of initiatives in 2016: it has been created the new “Borea Specialty Coffee” line (presented during the exhibition Host in Milan in October 2015) that combines innovation of Specialties and new extraction methods with the tradition of Borea family. It was created a limited edition coffee cup, with the historical company logo designed by the founder Giuseppe Borea; created in collaboration with the Ancap of Verona. The family also decides to do a complete makeover of all packaging bags of the products for bars, starting with the metal box of the anniversary blend, created to celebrate its 70th anniversary in 2006, and it is now presented in a new look.

“I consider the succession of every ten years of the company as important stages in the business adventure story that marked the life of my family and company – says Alessandro Borea, the owner – When it came the time to remember the 80th anniversary we wondered how do it. We wanted to do something that would express our peculiarities, the spirit that always inspires us, something that would truly represent La Genovese“.

To greatly close these 12 months, Saturday, October 1st at the “ExAtelier” Social Wine Café, in the historic center of Albenga owned by Matteo Borea (Export Manager of La Genovese and member of the third generation of the family of roasters) around 17:00 It will be presented the book “A Coffee with Dario Borea. 1936 – 2016 La Genovese turns 80“. To continue with a real party full of historic photos of the company, social initiatives, meetings between customers, suppliers and friends of the company, great food and lots of coffee – continue Alessandro Borea – My father always taught us that it’s the product we offer that have to speak for us. And nothing else. He’s our strength, our face, the only way we always used to talk about us.

After all, that’s why we created the Grand Anniversary Blend when it came the time to celebrate the 70th anniversary. But we couldn’t repeat. So I talked to my father who actually tried to “escape”, leaving us every decision. But when he said a phrase, indicating a big picture that we have in our offices made me realize what to do: “Always remember that those two are not the founders of La Genovese.” He was referring to my grandparents. So why not tell about the first 80 years of La Genovese through his memories? “.

The Borea family awaits you to celebrate 80 years of work, memories, passion and the beautiful Albenga, which has changed along with the company.