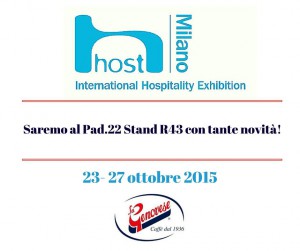 La Genovese greets the beginning of the autumn season with an agenda packed of meetings and news, especially related to the upcoming anniversary of the company, that in 2016 will celebrate its 80th anniversary.

The first major event is the participation to HOST – International exhibition of the hospitality industry, the world’s leading Ho.Re.Ca and retail event, from October 23 to 27 in Milan.

For La Genovese, the exhibition will be the first opportunity to present some of the novelties of the new season. The innovative line “Borea Specialty Coffees” that differs from what has been done so far starting from the packaging, becoming part of the world of “Specialty Coffees” the new generation of products that are enhancing bartenders and consumers around the world. The Brew Bar, the new coffee extraction method that has met with great success, particularly in Northern Europe. 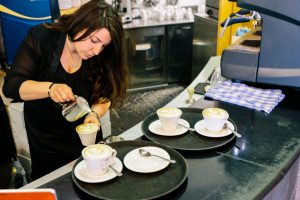 Unmissable events during HOST are the semi-finals and final of the “Espresso Italiano Champion”, the international competition for bartenders organized by INEI the National Italian Espresso Institute, which since the beginning of 2015 saw the challenge of dozens of professionals around Italy and abroad. The nineteen semi-finalists, who will compete for the title on Sunday, October 25th at the stands Wega, Astoria and Vibiemme, come from around the world and among them there will be also Mrs Sara Trotta, a Ligurian bartender, winner of the competition that took place in Alassio last May. Then, everybody let’s go to HOST to cheer for Sara who will represent La Genovese and our region!

Many are, in fact, the reasons to visit our booth in Milan, where it will also be possible to preview the new La Genovese Official video and the new version of the company website, which will be of course mobile-friendly.

Do not forget, also, that the proximity of HOST to EXPO 2015, allows a visit to the Universal Exhibition during its last week before the final closing.